NZ vs BAN: Watch - Bangladesh took the worst review ever as the ball was hitting the middle of the bat of Ross Taylor
By Silambarasan KV Tue, 4 Jan 2022 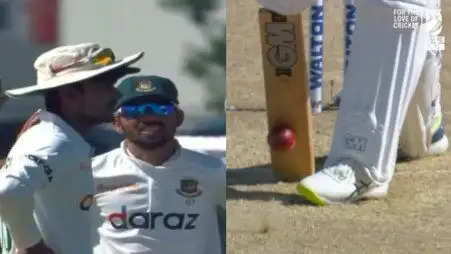 The first Test between New Zealand and Bangladesh is going on at the Bay Oval in Mount Maunganui. The skipper of Bangladesh won the toss and opted to take the field. New Zealand got a good total on the board, having scored 328 runs with the help of Devon Conway's fabulous 122 runs that consisted of 6 fours and a six.

Henry Nicholls and Will Young have scored 52 and 75 runs respectively. Following the total, Bangladesh got a good lead in their first inning, as they posted 458 runs on the board. Mominul Haque top-scored for his team with 88 runs that included 12 boundaries.

The middle-order batters also contributed well with the bat. New Zealand has now taken the lead of 17 runs, having scored 147 with the loss of 5 wickets. At the end of day 4, Ross Taylor and Rachin Ravindra remained unbeaten 37 and 6 runs. On day 3, the director of the Bangladesh team, Khaled Mahmud has opened up about the situation and said, "Tomorrow morning is very important. We have four wickets. There is Miraj and Yasir and we have a 73-runs lead.

If we can get another 70 runs lead then it will be close to 150 runs lead and at that point, we will be in a good position. We want to survive and do well. Even if we cannot win, we want to draw in the Test match. Still, there is 180 overs left and it will be difficult to score runs if we can bowl well," quoted as saying in Cricbuzz.

"I always speak with them (players) separately and try to inspire them. I just told them that we have lost a match despite declaring at 595 but we cannot always lose. One group must stand up, and why not this group.

We need to follow the right process and more importantly play with courage and freedom. There is no ghost here. We had the confidence that we can do it but also had the fear considering this is a young team," he added.

Straight onto the middle of Ross Taylor's bat! #NZvBAN pic.twitter.com/AxqrR3czS1

Bangladesh lost their last remaining review when THIS was given 'not out' for LBW!