"I’m staying on this level but the doors won’t open" - Steve Smith got stuck inside a lift over an hour
By Silambarasan KV Thu, 30 Dec 2021 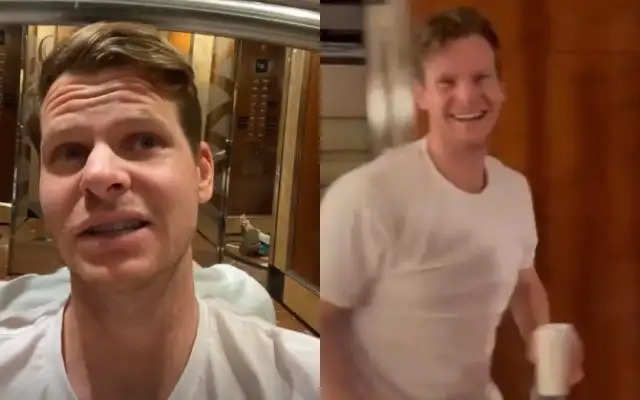 The vice-captain of the Australian cricket team in the ongoing Ashes series 2021-22 has been stuck in the lift for more than an hour on 30th December, Thursday. While posting a video on his Instagram story, the right-handed batsman stated that the door of the lift was not opening which made him to stuck inside the life for over an hour.

In that case, Steve Smith posted a story on his official Instagram account and said, "I’m on my floor, I’m staying on this level but the doors won’t open. Out of service up there apparently.

I’ve tried to get the door open; I’ve got this side open, Marnus (Labuschagne) is on the other side trying to open that to not much avail. Not quite the evening I had planned, let’s be honest."

What else do you do when you’re stuck in a lift, says Steve Smith The 32-year-old couldn't get enough help from the right-hander Marnus Labuschagne, who was trying to help his vice-captain outside of the lift. Moreover, Steve Smith also added that he's going to take a seat due to nothing left in his mind to do.

"Well, I’m just taking a seat. What else do you do when you’re stuck in a lift? I could be here for a while. Anyone got any suggestions for what I can do?" the 32-year-old added.

While Marnus Labuschagne trying to open the door, the operators of the lift arrived in a while and freed up Australia's deputy captain. As of now, the right-hander will be in looking to get some runs from his willow ahead of the 4th Test against England in the Ashes series 2021-22.